Iranian President Mahmoud Ahmadinejad adressed the United Nations today, where several countries walked-out as he berated Western nations, Israel, and capitalism. He suggested the September 11, 2001 terrorist attacks in the United States were the work of the U.S. government. He said he knew this because his beard is a super-sensitive antenna that can pick-up CIA radio transmissions.

Ahmadinejad also denied that he had been in the apartment of the Nicaraguan consul when he was murdered the previous evening – even though the body of the diplomat had not as yet been discovered. After an aide whispered to Ahmadinejad he backtracked on this statement: “Well, IF the Nicaraguan Consul was murdered last night by having his throat cut with a Wilkinson tempered steel razor blade, while he was wearing a flimsy silk negligee and holding a dozen roses with a card that said ‘From Mahmoud with love’, THEN I was nowhere near the place”. 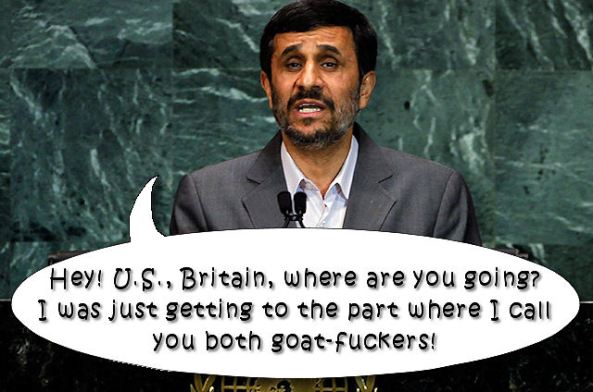 Mark Kornblau, a spokesman for the U.S. mission to the U.N., said in a statement, "Takes one to know one"

Some days I just get to sit back and let reality do the work for me.