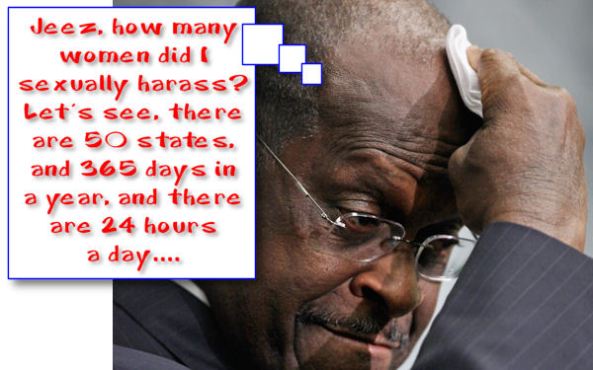 Another woman who worked at the National Restaurant Association alleges GOP candidate Herman Cain sexually harassed her when he was the Association President.

Sharon Bialek, who worked at the National Restaurant Association’s education foundation, has alleged that Republican presidential front-runner Herman Cain groped her shortly after she stopped working for the lobbying group.

Shortly after leaving the NRA Bialek contacted Cain to ask for help finding a job. She traveled to Washington, D.C. to meet with Cain. When she arrived she discovered he had upgraded her hotel accommodations to a luxury suite, then took her to dinner in an Italian restaurant (always a sign of trouble), and then while on the way to the NRA offices in a limo Cain placed one hand under her skirt and the other on the back of her head, forcing her toward his crotch. When she protested Cain stopped and said “You want a job, right? Well the job is in my pants.”

However, Bialek says, the job was not in his pants, and what was was not the kind of work she was seeking. “I was looking for a good job” she said.