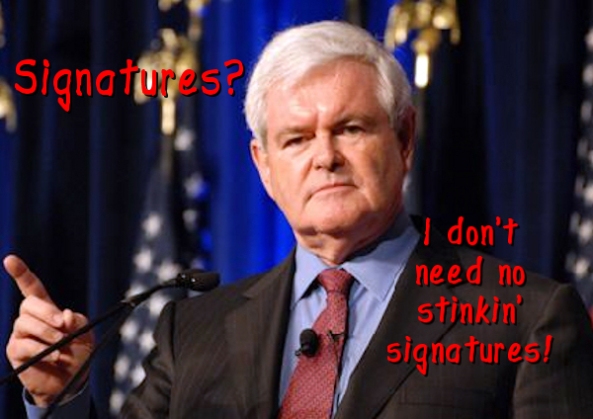 GOP mostly-front-runner Newt Gingrich failed to secure the necessary 10,000 signatures for a spot on the Virginia primary ballot.

Republican Presidential candidate Newt “Laws Is For Losers” Gingrich is blaming Virginia for keeping him off the state Republican primary ballot. Like Texas Governor Rick Perry, Gingrich failed to get the required 10,000 voter signatures to qualify for the ballot.

The Gingrich campaign said “only a failed system” would disqualify Gingrich from running in Virginia. “They require all these signatures from candidates no one in Virginia wants to vote for – that’s blatantly unfair just because we’re unpopular!”

Gingrich campaign director Michael Krull said his candidate will run a write-in campaign, even though write-ins are illegal in Virginia primaries. “That’s their problem,” Krull said. “Newt Gingrich isn’t just above the law – Newt Gingrich IS the law!” And as if to prove his point he had several campaign workers summarily executed “just because I can!”

On a lighter note, Virginia is Gingrich’s home state.