A senior adviser to Mitt Romney has said the candidate agrees with President Obama that the penalty attached to the “individual mandate” portion of the Affordable Care Act of 2010 is not a tax.

Eric Fehrnstrom, in an interview on MSNBC, said Romney “agreed with the dissent written by Justice Scalia which very clearly stated that the mandate was not a tax.”

When the interviewer asked Fehrnstrom if he meant Romney agreed with Obama and Democrats that the penalty is not a tax, Fehrnstrom said “That’s correct”.

Earlier this year Fehrnstrom famously referred to a political campaign as being like an Etch-A-Sketch, in that once the primary is won a candidate can shake-up their message and move toward the center to whore for votes. 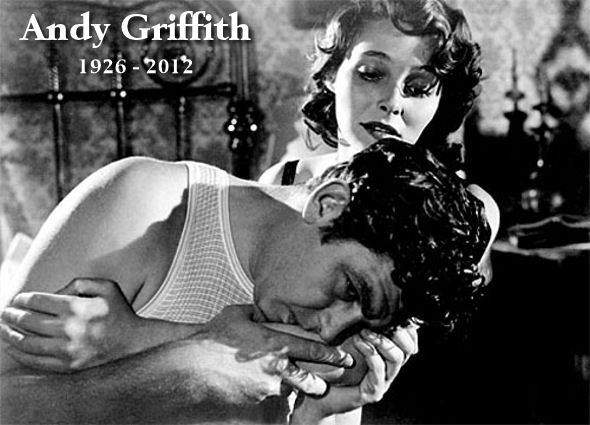 For people of a certain age Andy Griffith is a part of our past – a touchstone with the innocence of childhood. Sure we remember watching “The Andy Griffith Show” with our family crowded around a (probably) black and white TV set. And there was something in it for each person in the room, whatever their age.

But Andy Griffith had a degree in music and released numerous gospel, country, and bluegrass records. He had a career starring in films like “A Face In The Crowd” (with Patricia Neal, above) and “No Time For Sergeants”, “Angel In My Pocket” and “Hearts Of The West”. His talents ranged from broad comedy to serious drama, and his long list of credits includes thrillers, mysteries, one science-fiction series, comedies, and variety programs.

He was perhaps one of the most underrated talents of the 20th century, probably due to the “aw shucks” hillbilly persona of Private Will Stockdale and of course Andy Taylor. Griffith was so closely identified with that persona that when he stepped out of it people were taken aback. But when he stepped out of it he did some great work that showed his range as an actor, musician, writer, and producer.