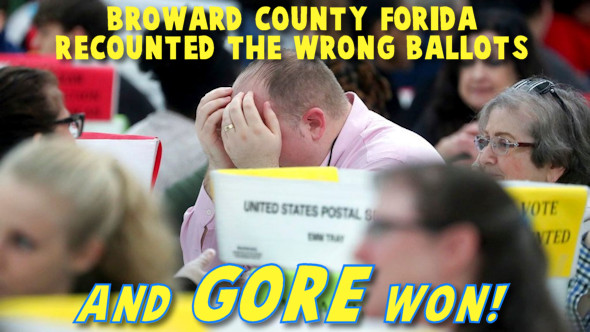 (Click the image to read the full story at FoxNews.com) 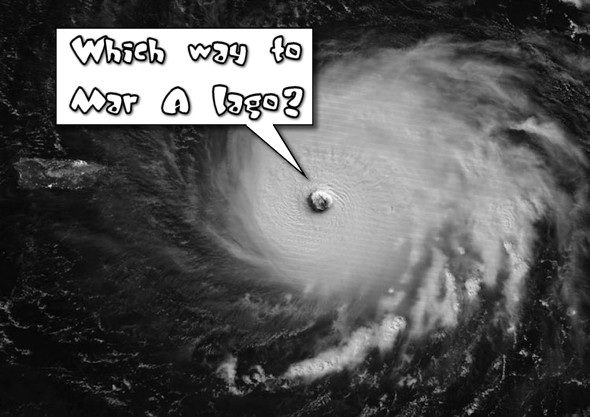 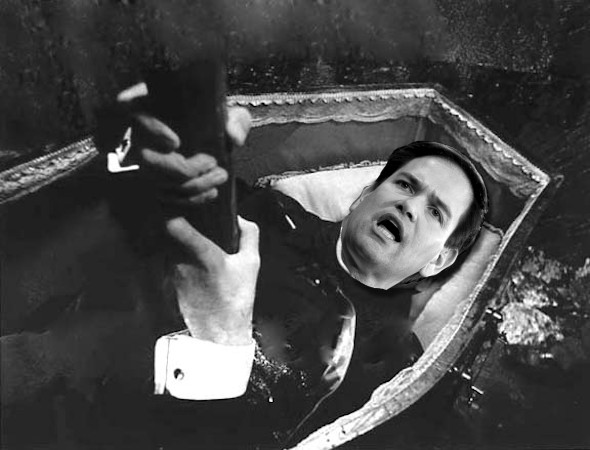 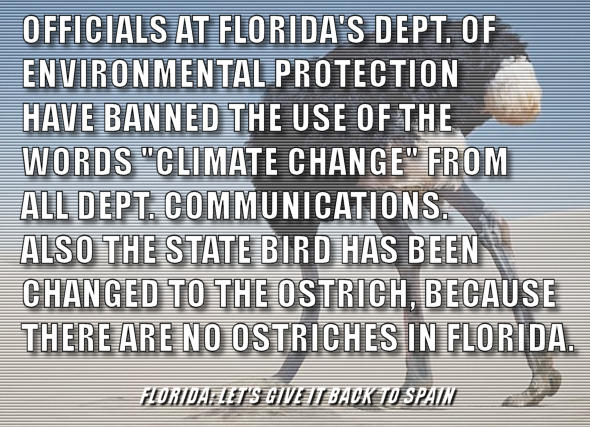 (Click the image to read the full story at MiamiHerald.com) 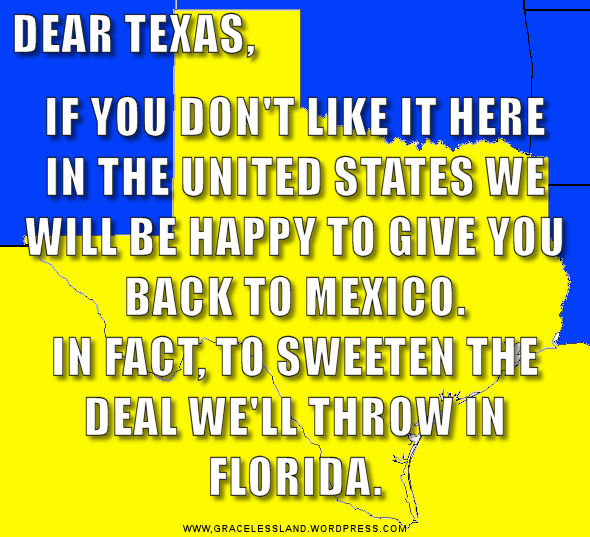 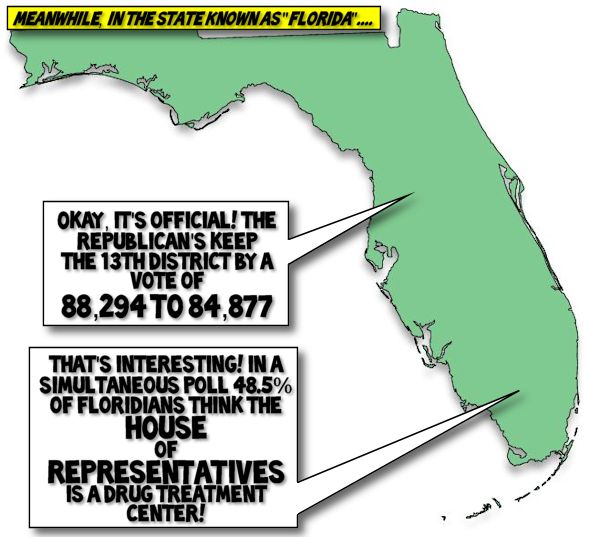 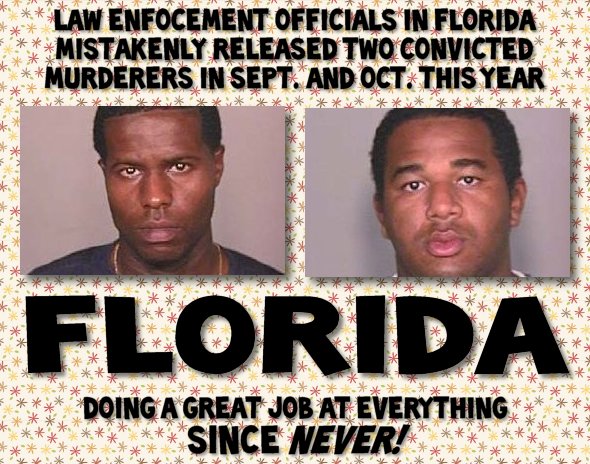 (Click on the image to read the full story at CNN.com) 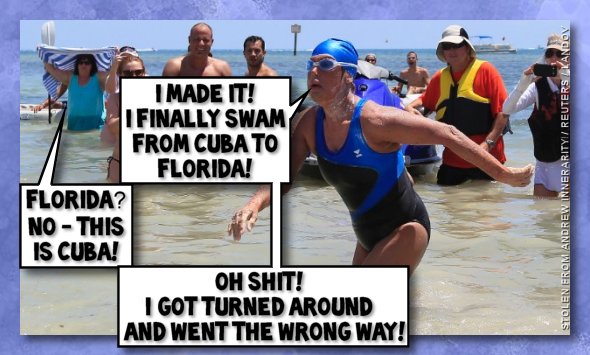 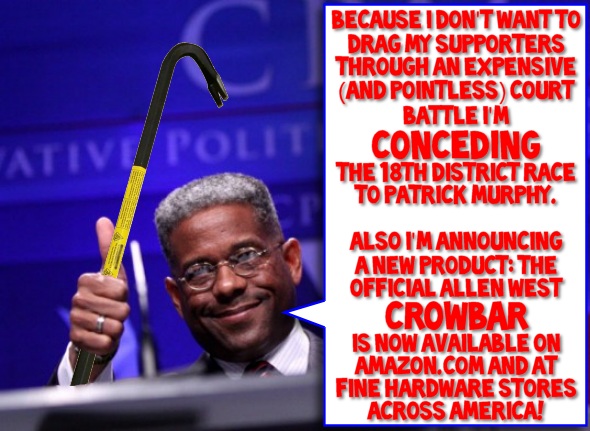 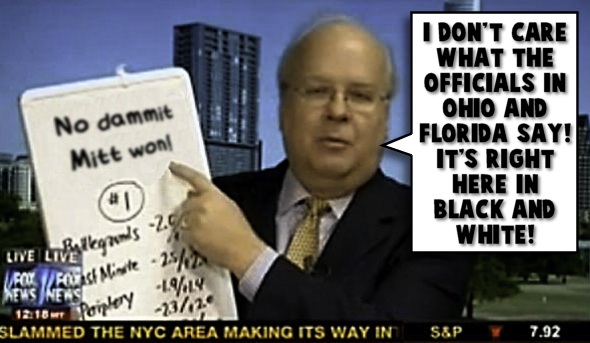 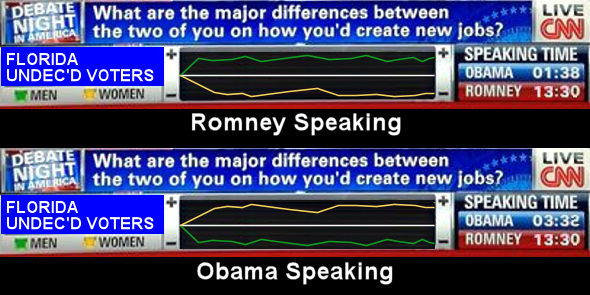 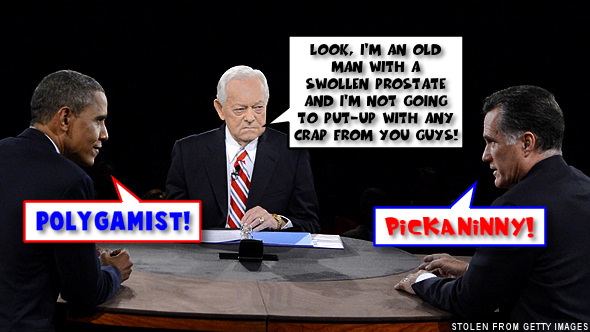 Moderator Bob Schieffer of CBS News kept a steady hand on the time and the decorum. 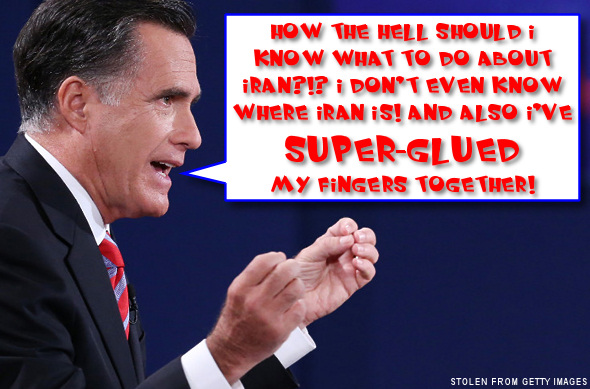 GOP Candidate Mitt Romney gestures as he makes a point during the debate. 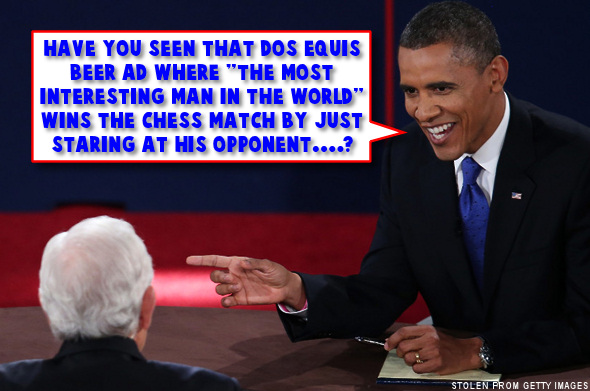 President Barack Obama gestures as he makes a point during the debate. 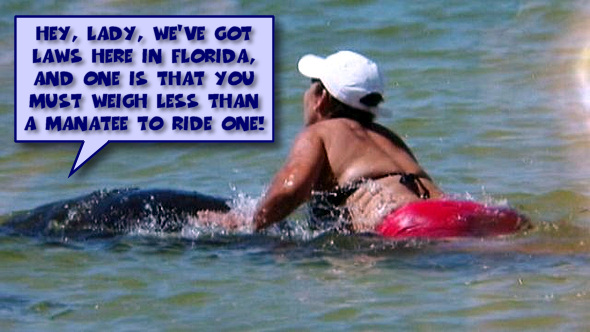 A Florida woman who rode several manatees may be jailed for up to 60 days and fined up to $1,000.00 under Florida law. Gloria Garcia Gutierrez was videotaped by witnesses as she swam among and rode on the protected aquatic mammals.

The New Port Richey, Florida, Police Department wants to know: who is Roy Antigua? Antigua was arrested August 1 for violation of parole and a traffic offense. Police later found numerous suspicious items at his home and in his car: diplomatic license plates, dozens of fake identification cards from the Department of Homeland Security, Immigration and Customs Enforcement, Department of Defense, CIA and NASA, access badges to hospitals around Florida, doctor and nurse scrubs, a respiratory technician badge, police blue lights, access stickers to Coast Guard bases around Florida, and a fake CostCo card.

“It was the CostCo card that made us suspicious,” said James Steffens, chief of the New Port Richey Police Department. “That other stuff may have a plausible explanation, but who would want to tangle with CostCo?” 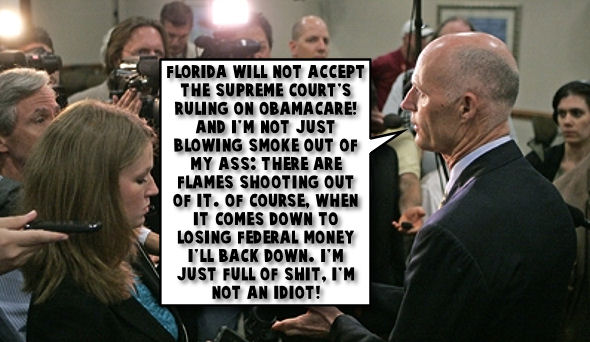 Florida Governor Rick Scott says he believes the Affordable Care Act will be repealed when Mitt Romney is elected president, and so Florida will not implement it. Of course if Romney isn’t elected then he will be able to back-out of this by saying obviously America wants to be run by a Kenyan socialist Muslim, and who is he to argue? Of course to not implement a federal law could lead to loss of federal funding for related programs and services, which would probably be the end of Scott’s political career. So no matter what kind of b.s. he spouts now before the election, it still just amounts to bullshit. 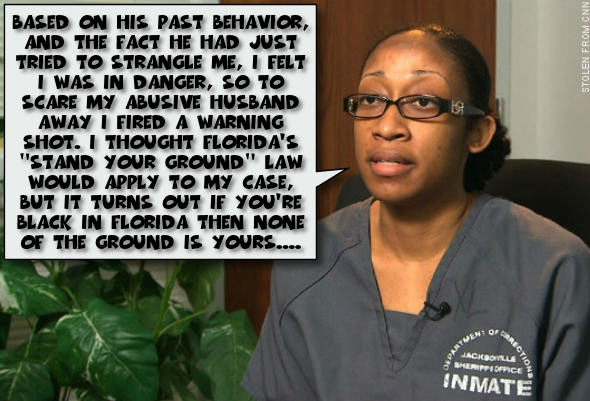 Marissa Alexander was sentenced to 20 years in prison for firing a warning shot to scare-off her abusive husband. Though she used Florida’s “Stand Your Ground” law as her defense, State Attorney Angela Corey successfully prosecuted her for aggravated assault. Corey is the State Attorney handling the Trayvon Martin-George Zimmerman murder case. 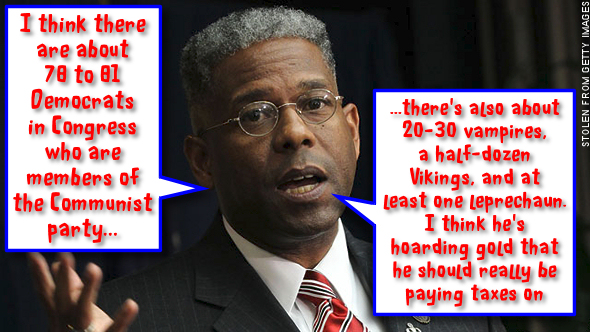 Representative Allen West (R - FL) was asked at a town hall meeting in Jensen Beach how many members of Congress are "card-carrying Marxists". West responded that he thought there are 78 to 81 Communist Party members among Democrats in Congress - most of them members of the Congressional Progressive Caucus. 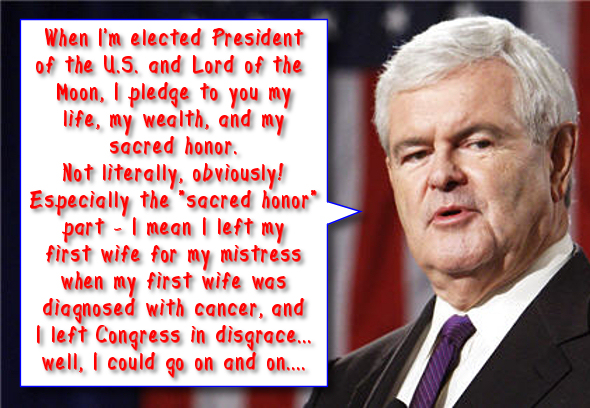 In his Florida "concession" speech losing GOP candidate Newt "I'll Promise You Anything" Gingrich told his supporter the things he will do once elected President, and pledged his "life, wealth, and sacred honor" to someone who would presumably want that. 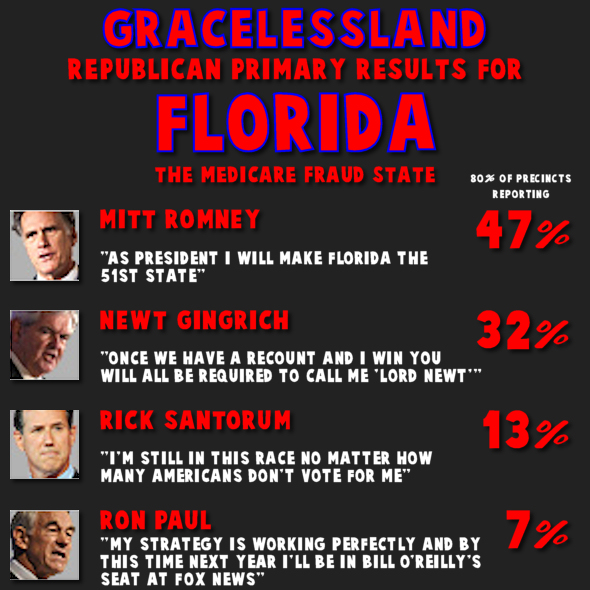 With 80% of Florida's voting precincts reporting GraceLessLand is projecting Newt Gingrich to lose the Florida Republican Primary to Mitt Romney a whopping 32% to 47%.

Official GOP megalomaniac Newt “Bow Before Me” Gingrich has suffered a tremendous blow to his ego and his campaign in the Florida Republican presidential primary. Mitt Romney crushed Gingrich by a 15% margin, making the already diminutive former Speaker of the House of Representatives of the United States of America several inches shorter and almost a foot larger in diameter.

“I won’t be making a concession speech” Gingrich told a crowd of several supporters. “Instead I’m going to pull a Gore and demand a recount. And I won’t forget this, Florida! You’re on my list – once I take my rightful place as President of the United States and Lord of the Moon, I’m going to ship the whole lot of you to Pluto to work in the ice mines!”

With 80% of Florida’s precincts reporting we predict Romney will win with at least 47% of the vote – and with 20% of precincts to go his percentage could go up and be even more humiliating for Gingrich, who only managed to garner 32% of Florida’s predominantly aged and infirm Republican voters, who are often confused when intending to vote for Romney and therefore accidentally vote for other candidates who aren’t Romney. For example 13% of them voted for Rick Santorum by mistake simply because their hands shake and they punch the wrong button, and Santorum comes after Romney in the alphabetical ballot listing.

Ron Paul took-in 7% of the vote, not coincidentally the exact percentage of Floridian voters who are drunks reeling about in the Florida Keys dressed like Earnest Hemingway and pining for the “good old days when we could get drunk and screw hookers cheap in Cuba”. 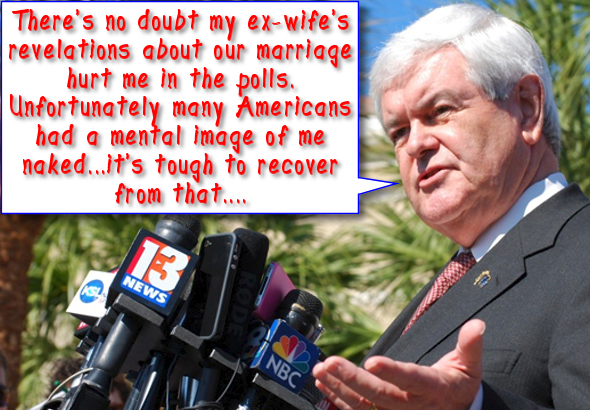 Over the past week GOP front-runner Newt Gingrich has seen his lead over rival Mitt Romney evaporate. The pair are now in a statistical dead heat at 28% to 27% according to Gallup's nationwide tracking poll. 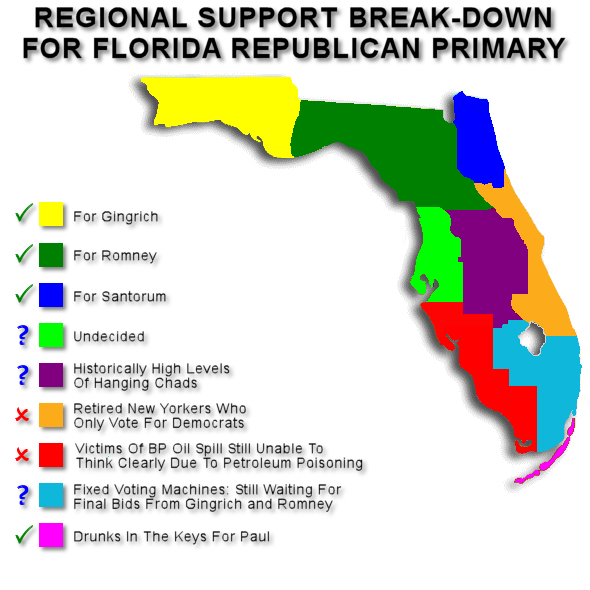 This color-keyed chart shows the most likely voting patterns for the Republican primary in Florida. 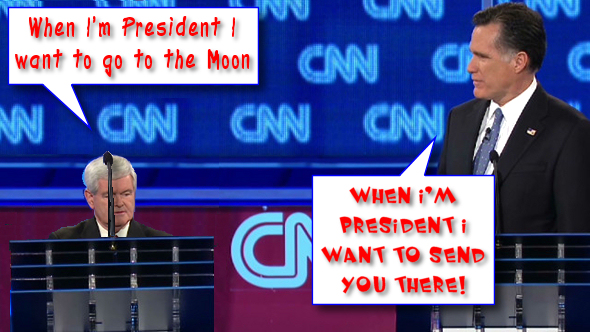 Newt Gingrich was the main target Thursday night in Florida as the four remaining GOP presidential candidates engaed in the last debate before the Florida primary vote.

At least one of the gloves came off for each of the Republican candidates as they struggled to gain advantage over one another in the final GOP debate before the Florida primary on Tuesday.

NEWT GINGRICH: Managed to avoid talking about the lies he told America and John King when he said he had “witnesses” that approached ABC to rebut the interview his ex-wife did, in which she revealed what a callous ass-chaser he is. Wolf Blitzer wasn’t going anywhere near that stuff, although there was an uncomfortable moment when the candidates were asked why their wife would make a good first lady. It almost appeared as if Gingrich might say “which one?”

MITT ROMNEY: Is still handicapped by being embarrassingly rich. He did manage to deflect most of the blame for his wealth on the trustee of his “blind trust”. A blind trust is like a super PAC – there is no coordination between the candidate and the trustee/PAC manager, unless you count daily phone calls and deleted emails.

RICK SANTORUM: May have screwed-up when he let it slip he thinks global warming is a hoax. While he was careful to affirm his faith in God, he probably doesn’t want to alienate fence-sitting independents who don’t think science is an abomination.

RON PAUL: Managed to turn every question into a criticism of the Federal Reserve system. At this point you start to think even though he’s a doctor he may think the Fed causes cancer. 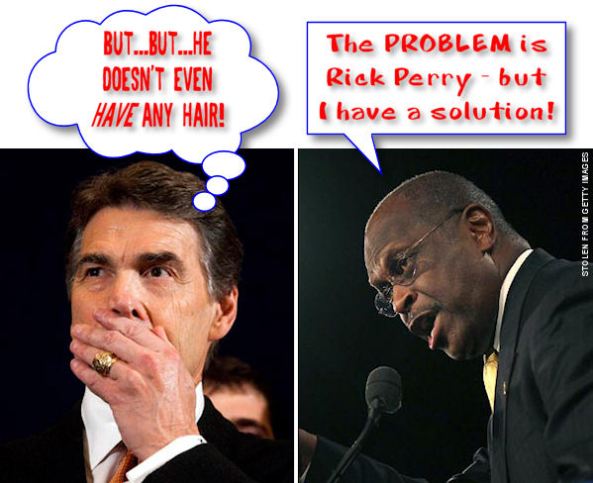 Perry is currently leading national polls, with Romney running second and Cain a distant also-ran. However, because of Florida’s traditional disproportionate effect on national politics, and the state’s traditional electoral incompetence, it is difficult to judge how Cain’s win in the unofficial and non-binding straw poll may affect the race. Perry may actually die as a result, and Romney may lose the ability to feed and dress himself.

Actually the entire thing is insignificant, considering only 2,657 votes were cast, and those by drunks who were farting corndogs.

Hey, what luck! The state least-likely to competently hold an election is once again the most-likely to matter. Is our electoral system great or what? 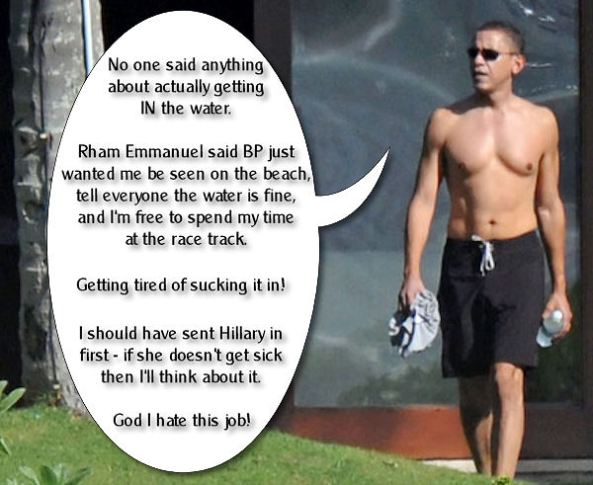 President Barack Obama is vacationing on the Gulf coast in Florida.