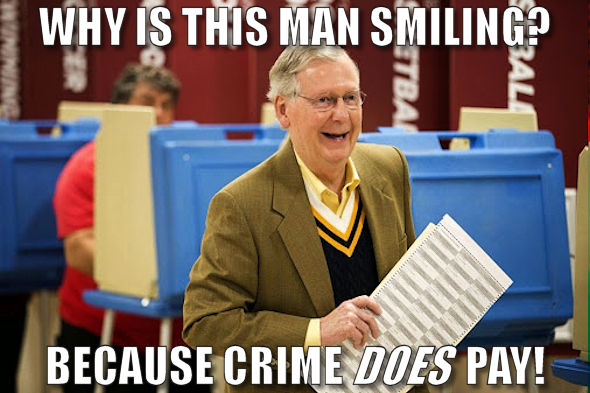 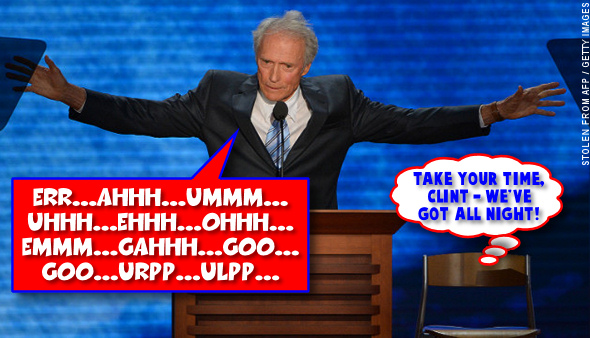 Hollywood megastar Clint Eastwood admitted he had no clue what he was going to say in his remarks at the recent Republican National Convention. In an interview with the Carmel, CA Pine Cone newspaper Eastwood said Romeny’s campaign people “vet most of the people, but I told them, ‘You can’t do that with me, because I don’t know what I’m going to say’”.

Two weeks later, most people still aren’t sure what he actually did say. 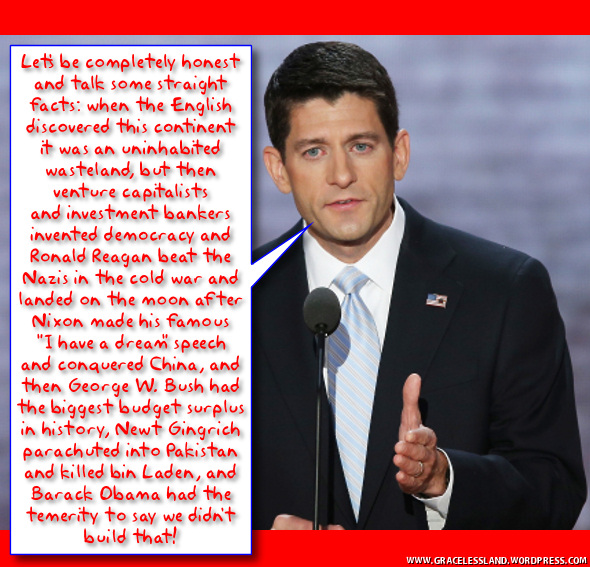 Some media wonks are complaining that GOP Vice-Presidential candidate Paul Ryan may have played fast and loose with the facts in his speech to the Republican National Convention Thursday. But the Romney/Ryan campaign refuses to be intimidated, because as Mitt Romney pollster Neil Newsome said: “We’re not going to let our campaign be dictated by fact-checkers”.

Ex-New York Mayor Rudy Giuliani also spoke-up for Ryan, saying “Well, look, when people give speeches, not every fact is always absolutely accurate”. But that inaccuracy doesn’t change the fact that they are still facts.

Seven of the approximately 2,000 GOP presidential candidates at the recent New Hampshire debate.

A national Bloomberg News Poll indicates that likely GOP voters don’t find much to get excited over in the current crop of 2012 presidential candidates. 58% of voters likely to vote for a GOP candidate “hoped another candidate would throw their hat in the ring”.

Of that group, 34% couldn’t tell the difference between Tim Pawlenty and Rick Santorum. 43% disliked Mitt Romney because his facial expression never changes. 100% thought Ron Paul is insane. 63% would vote for Herman Cain if they got a free pizza. And finally 86% of voters likely to vote GOP thought Newt Gingrich and Michele Bachmann were too small to hold office.

54% of those polled say they will likely vote to re-elect President Obama just because they figure he’s already screwed-up as is much is humanly possible and can only get better in a second term. 30% of those voters say they will definitely vote for Obama because they are unimaginative and dull.

Seven of the over two hundred GOP presidential candidates met in New Hampshire for a debate, sponsored by CNN. Though they all tried to differentiate themselves from their competition, the results were mixed.

It quickly became obvious that Tim Pawlenty and Rick Santorum are the same person: they look the same, sound the same, and say the same things. But Pawlenty/Santorum gets agility points for moving so quickly between podiums.

Michele Bachmann and Newt Gingrich are the same height, and though Gingrich has her on weight and reach, Bachmann is somewhat lighter on her feet.

Mitt Romney and Herman Cain are both members of minority communities: Cain is black and Romney is plastic.

Only Ron Paul managed to make himself stand out by constantly implying that all issues are bullshit except getting rid of almost all laws and the Federal Reserve, as he revealed his vision of a Darwinian America based on the principle of “dog-eat-dog”.

The seven candidates struggle to look like different people. 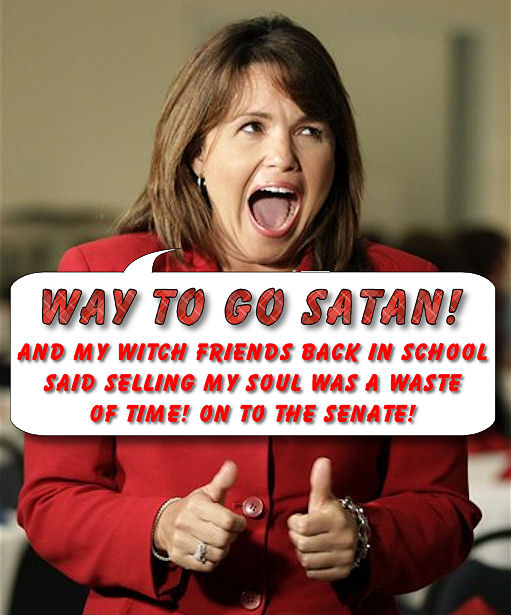 Delaware GOP candidate for Senate Christine O’Donnell finally addressed comments she made on Bill Maher’s “Politically Incorrect” to the effect that she “dabbled in witchcraft”. O’Donnell says she was a teenager, and she has not engaged in satanic rituals since high school.

“You know, you’re young, you’re experimenting. A lot of kids were into drugs and being student body president and drama and sports – I was chanting incantations to summon the Demon Lord from his flaming domain of brimstone and agony. It was just a phase.”