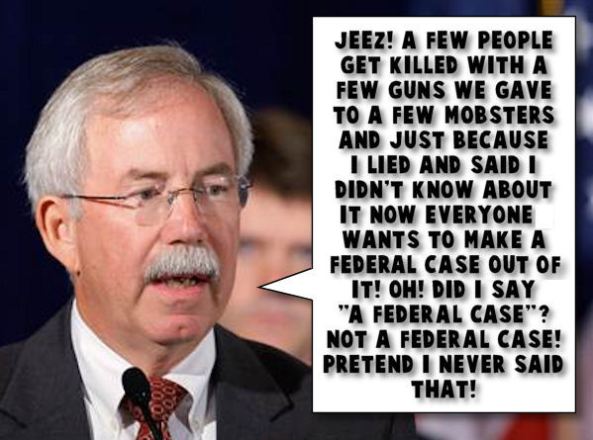 Acting ATF Director Kenneth Melson talks with the media about the "Fast and Furious" fiasco.

The acting director of the Bureau of Alcohol, Tobacco, and Firearms has been reassigned to a lesser position due to his involvement in the so-called “Fast and Furious” weapons fiasco, which resulted in the ATF selling literally thousands of automatic weapons to buyers representing Mexican drug cartels.

“Really the dumbass should go to prison” said Attorney General Eric Holder. “But since that might reveal my own and the Obama administration’s role in this thing, that obviously isn’t going to happen. So instead we’ve sent him to the oblivion of being a ‘senior adviser’, like in Antarctica.”

Rice testifies before Congress about her meeting with Gaddafi. 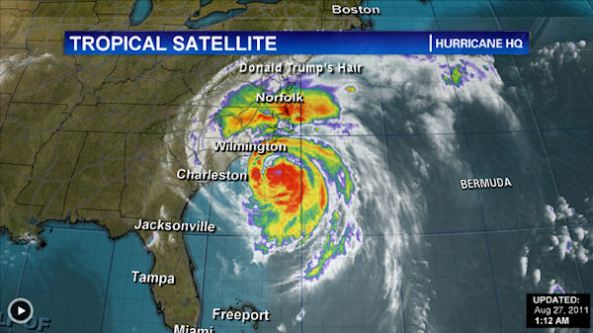 A satellite image shows hurricane Irene seems to be probing the NC coast - almost as if the storm were searching for something.

Hurricane Irene, now surging to category 2, is approaching the coast of North Carolina. “It’s definitely headed north” a U.S. Weather Service spokesperson said. “It’s really making a bee-line for Atlantic City – almost as if the storm had some purpose or target in mind.” 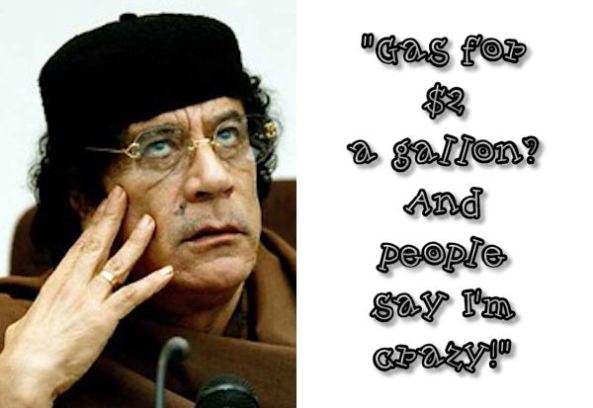 Libyan strongman Muammar Gaddafi (or however it's spelled this week) contemplates the benefits of democracy.

As rebel forces close-in on Libyan dictator Muammar Gaddafi, the soon-to-be-ex-dictator is said to be contemplating his future. “Perhaps I will move to the United States and become a citizen” he is reported to have said. “Perhaps a career in politics there? I understand they have a party that drinks tea that I might do well in.”

A goodwill basketball game between the U.S. Georgetown college team and the Chinese military Bayi Rockets turned into a fist-fight Thursday.

The fight seems to be a misunderstanding. In Chinese the words “Geolge Towrn” mean “Fuck You Little Chinese Assholes”; while in English the words “Bayee Rochets” means absolutely nothing.

Apparently a really tough thing to become – probably not least because the first thing you have to do is admit you want to be one. 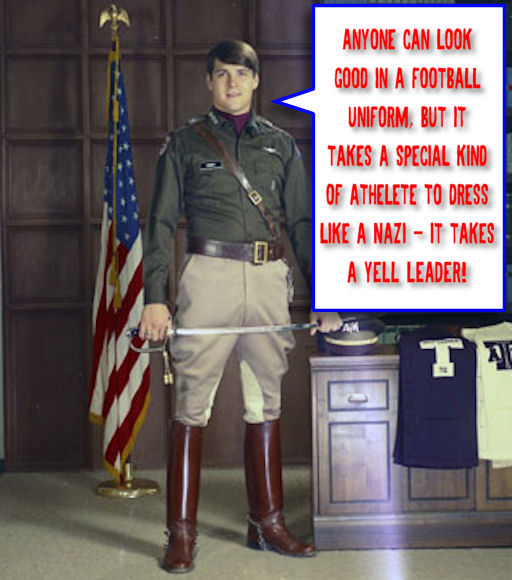 Here's yell leader Rick Perry in an ensemble that really makes a statement - it says "I want to go down to the synagogue and yell at some jews!"

Here Perry relaxes in a more casual outfit just before going into the bathroom with a copy of "Pool Boy" magazine. 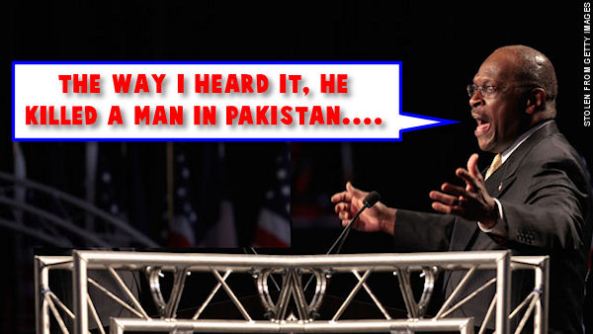 GOP presidential hopeful and ex-pizza guy Herman Cain says President Obama could be impeached except the Senate is controlled by people who aren't crazy.

A Kentucky man and his wife are suing the surgeon who amputated the man’s penis in 2008. The doctor maintains the amputation became necessary upon discovering cancer during a circumcision procedure.

A jury was seated “swiftly”, if uncomfortably, with all the male jurors sitting with their legs crossed while all the female jurors are on the edge of their seats, many smirking or actually audibly giggling.

Michele Bachmann does her magic act for voters during a campaign stop in the Land of Oz.

GOP presidential nomination candidate Michele Bachmann blamed President Barack Obama for the high price of oil, and promised she will lower the price of gas to $2 per gallon if elected.

Bachmann also claimed she will make gay people straight with the power of her mind, will use a Ouija board to discover the locations of Jimmy Hoffa and D.B. Cooper, and will make Congress disappear.

Oh, and she says she can hypnotize snakes just by staring at them.

Which would be great except the date was the anniversary of Presley’s death 34 years ago.

Does anyone check this woman’s copy? Let’s see: she didn’t know what state Lexington and Concord were in when the “Shot Heard ‘Round The World” was fired (same one they’re still in: Massachusetts); she thought John Wayne the actor was from her home town – but it was actually John Wayne Gacy the serial killer; and now she has Elvis being born the day he died. I guess none of these are enough to disqualify someone to be President of the United States, but perhaps the trend in dumbness should.

This is not a joke: Michele Bachmann paid for 6,000 tickets to the Iowa Straw Poll that she then gave away to supporters and other attendees. And 4,823 of those people returned the favor by casting their ballots for her.

In contrast Ron Paul gave away very few tickets yet came-in second by only 152 votes. Yet the media is strangely mute about Paul’s very existence let alone his performance in Iowa. That’s because the media want a three-way between Bachmann, Romney, and Perry – it will be good for ratings.

Paying for votes at the Straw Poll is as old as the poll itself – the first was held in 1979 when George “Daddy” Bush bought the win – only to later lose the nomination to Straw Poll loser Ronald Reagan.

So what is the Iowa Straw Poll actually about? It’s about PR – it’s a way to buy media attention. Or if you’re Tim Pawlenty it’s a good way to discover you don’t have the stomach for national politics.

Tim Pawlenty explains the reasoning behind his decision to drop out of the race for the Republican nomination for president.

Former Minnesota governor Tim Pawlenty announced he is quitting the race for the Republican presidential nomination after losing to both Michele Bachmann and Ron Paul in the unofficial and non-binding Iowa Straw Poll.

Based on the votes of around 7,000 attendees at the Ames, Iowa fair, where voters paid $30 each to cast a ballot in the fundraising polling event, Pawlenty was a distant third with less than half the votes of either Bachmann or Paul.

When asked if dropping out of the race based on such a minor contest was really warranted, Pawlenty told reporters “I ate one of those deep-fried butter things, and now I have a terrible belly ache – ulp! Excuse me – must get to the restroom! Out of the way!”

Michele Bachmann has won the first of the nation’s unofficial, non-binding, wholly trivial campaign contests by taking the Iowa Straw Poll with 4,823 votes, just edging-out Ron Paul’s 4,671 votes. Tim Pawlenty came in third with 2,293 votes, making him an unbelievable loser when you consider who beat him.

Pizza magnate Herman Cain ran fourth with 1,456 votes, while Mitt Romney placed sixth with 567 votes, coming-in behind Texas Gov. Rick Perry’s 718 votes as a write-in candidate who wasn’t even on the ballot. Newt Gingrich placed a disappointing eighth, getting slightly fewer votes than a pile of petrified ox dung that managed to beat him despite doing no active campaigning.

The Guy From Utah didn’t take part in the Straw Poll.  Rick Santorum received a single vote, reportedly from the pile of ox dung.

Some of the more than five thousand GOP presidential nomination candidates appear before voters in the Iowa Straw Poll.

Eight of the more than three thousand Republican candidates for the party's presidential nomination met in Iowa Thursday.

Here a few tidbits of information we picked up from the latest GOP debate in Iowa:

RON PAUL lives in an alternate universe where all problems can be solved by reforming monetary policy and returning to the gold standard.

MICHELE BACHMANN takes so long to pee it made her late getting back to the stage after a commercial break.

MITT ROMNEY apparently thinks “the way the economy works” is you shut-down factories and make sure your state is 47th out of 50 in job creation.

TIM PAWLENTY likes to fight with short women and instead of raising taxes likes to create “fees”.

NEWT GINGRICH won’t answer “gotcha questions” like why did all your campaign staff quit and what are your foreign policy views, and thinks the crowd is bellowing “NEWT” when they are actually booing.

GUY FROM UTAH owns a company that created 10,000 jobs…in China.

RICK SANTORUM’s toupee causes me to have epileptic fits whenever his face is on-screen – and apparently has the same effect on Bret Baier because he never asked him anything.

Texas Governor Rick Perry explains his campaign strategy which he calls "MAD", or "Might Actually Do'er". "Do'er" is of course Texan slang for screwing a person or a country.

Texas Governor Rick Perry is just two polling points behind Mitt Romney in the latest CNN/ORC International poll. Of those Republicans and Independents who identify themselves as likely to vote for a Republican candidate 15 percent favor Perry, while 17 percent favor Romney. The poll has an error margin of more than 2% – making the two front-runners dead even.

“It’s the unknown factor X” one pollster said. “No one knows who the hell Rick Perry is, so he looks pretty good compared to the rest of the pack. There hasn’t been time for the media to smear him, and he hasn’t had enough national exposure to act like a moron in front of people.” 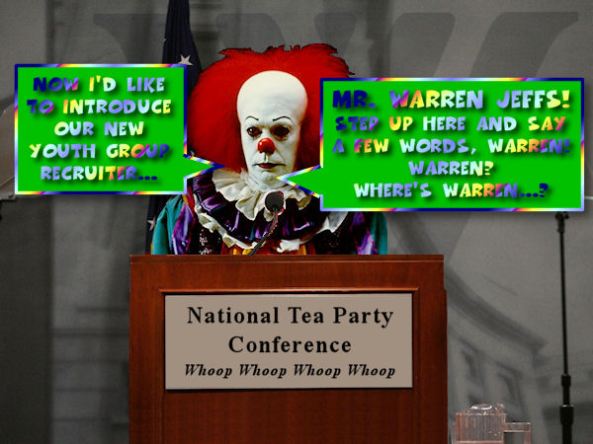 The President of the National Tea Party announces a new youth outreach program at the latest party conference in Toon Town U.S.A.

If you’re a collector of vintage kids’ books, then you know just how much some of these are worth if you can find them. The “Tom Swift” series is especially collectible because some of these titles have never actually been seen by anyone.

A Philadelphia college professor killed himself by diving over a second-floor railing inside a campus building during class.

Police say the 71-year-old math professor yelled at the students as he leaped: “I’m falling at 32 feet per-second squared, and it’s exactly 28 feet 7 inches to the ground – how long will it take me to – “.

Representative Gabrielle Giffords (D – AZ) returned to the House of Representatives yesterday after being severely wounded in an assassination attempt in January. Giffords returned to vote in favor of the new debt/spending package negotiated by President Barack Obama and Congressional leaders.

House members greeted Giffords with a standing ovation on her return to the House floor, and members of both parties shook hands and embraced her. Except for the Tea Party cranks, of course, but then these are people who go to their own rallies armed with handguns just in case one of their own is overcome by a liberal spasm and has to be put-down. 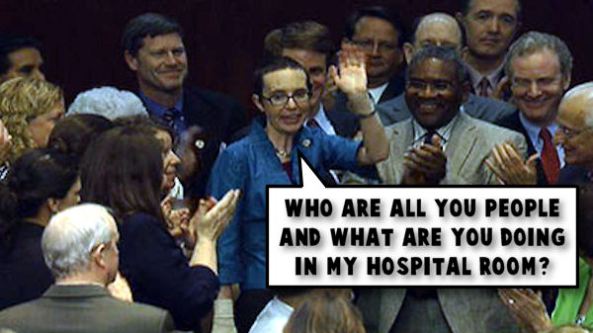 Rep. Gabrielle Giffords (D - AZ) is a bit overwhelmed by the emotional greeting from her House colleagues.

By a solid majority the Republican House of Representatives voted to approve the latest debt ceiling increase, allowing the United States to borrow trillions more and go even deeper into debt than ever before in history. Fiscally responsible Democrats tried to defeat the bill but had no chance in the GOP-dominated House – and may have to pass the bill through the Senate even though they have a slim majority there, due to Republican threats of reprisals on future legislation.

So-called “Tea Party” Republicans were dancing in the streets around the country to celebrate their victory over liberals by passing legislation that may someday cut spending by some token amount while increasing debt almost infinitely, thus guaranteeing the advent of a fiscal apocalypse and bringing their ultra-rightist prophets predictions of economic doom to fulfillment.

Liberals all over the country were downcast as their attempts to inject some economic responsibility into government finances were swept away by the landslide GOP vote in the House. “It’s spend, spend, spend, baby!” House Speaker John Boehner announced as the final vote was tallied. “Cocaine and hookers for everyone!”

Due to the intense emotions stirred-up by the U.S. debt ceiling agreement security for House Speaker John Boehner has been increased by 33%.